An inside outside view! 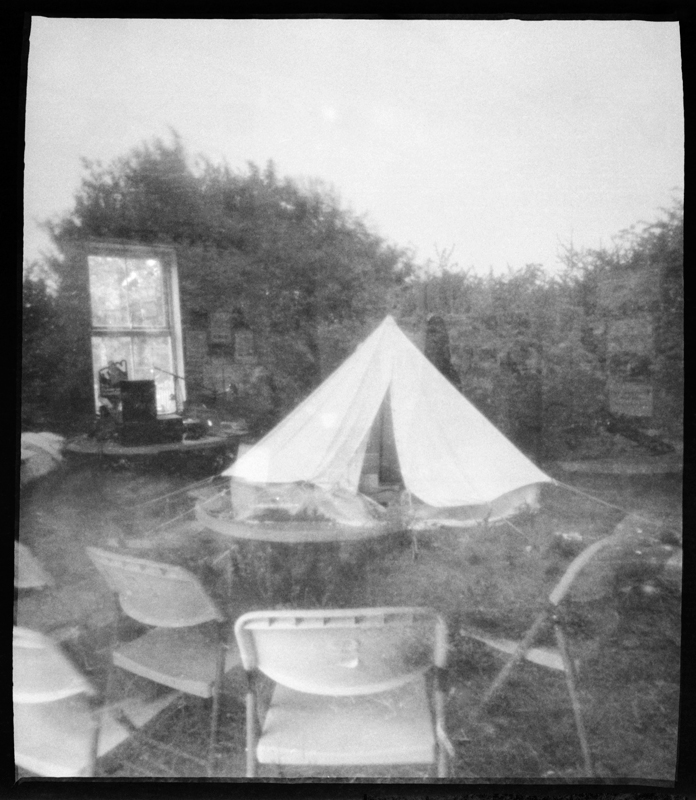 Sound camp took place again this first week of May 2015, in conjunction with Reveil, a 24 hour broadcast of the daybreak as it happens across the globe. The centre of operations was at The Shed situated at Stave Hill Ecological Park at Rotherhithe South London. This year it has increased in size and  the international sites now consist of places such as Belfast, Cumbria and Dartmoor for the UK the Upper Hudson River, New York; Chicago, Illinois; Toronto, Canada; Jeju Island, South Korea; Tartu County, Estonia; Santorini, Greece; Vitanje, Slovenija; Fortore Valley, Italy and Niolon, France. 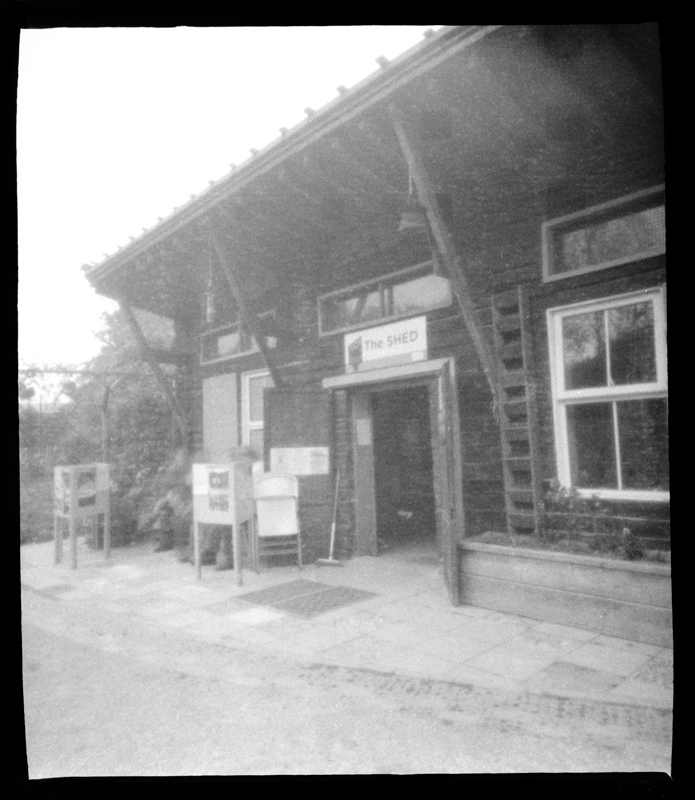 I shall first share my experience of the event at Stave Hill before posting the results from the international contributors. There is an awful lot of work here this year and it was good to see some of the tubes and cameras being returned and thoughtfully used. I shall discuss these contributions further in this posting. Many solar tubes were sent out to the participating sites these contained matchbox pinhole cameras and instructions on how to use, the cameras were handmade and each would have its own little quirks hopefully contributing to the final images.

Cameras and tubes ready to post to international contributors 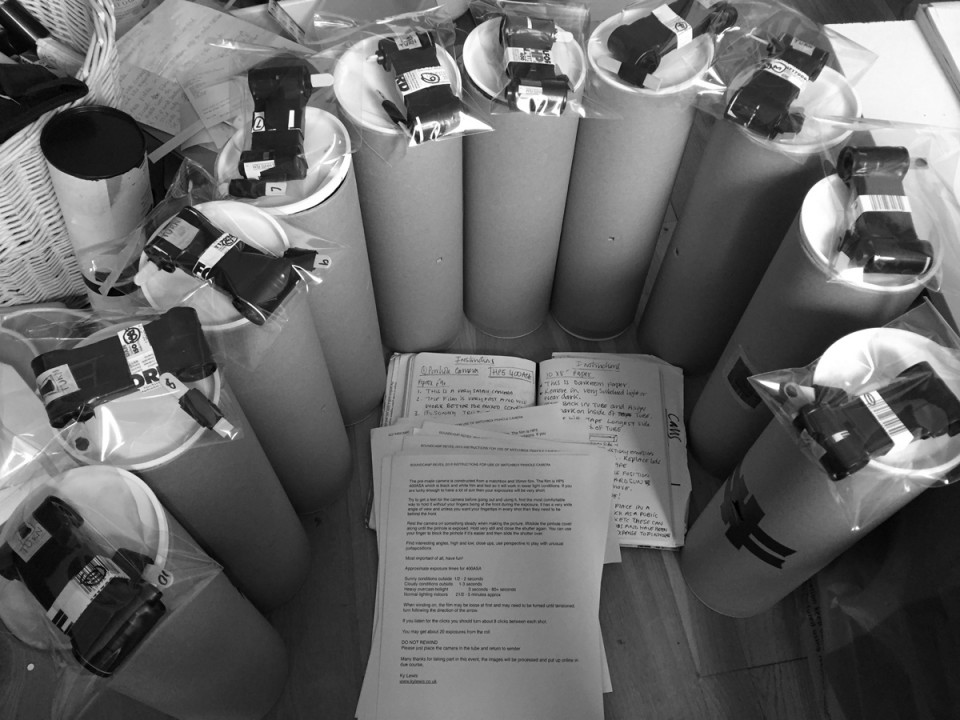 The actual event was to start at 5am on the 2nd May Greenwich time and continue for 25 hours. The soundscapes would come on line as the day rose, so travelling West across the globe. Due to the weather I had set up my solargraph cans a few days earlier in order to get them ‘warmed up’ and in the hope that if the sun came out they would capture something and also the extra exposure would lighten the image. It was just as well as it was possibly the most abysmal weather ever for a May bank holiday weekend. 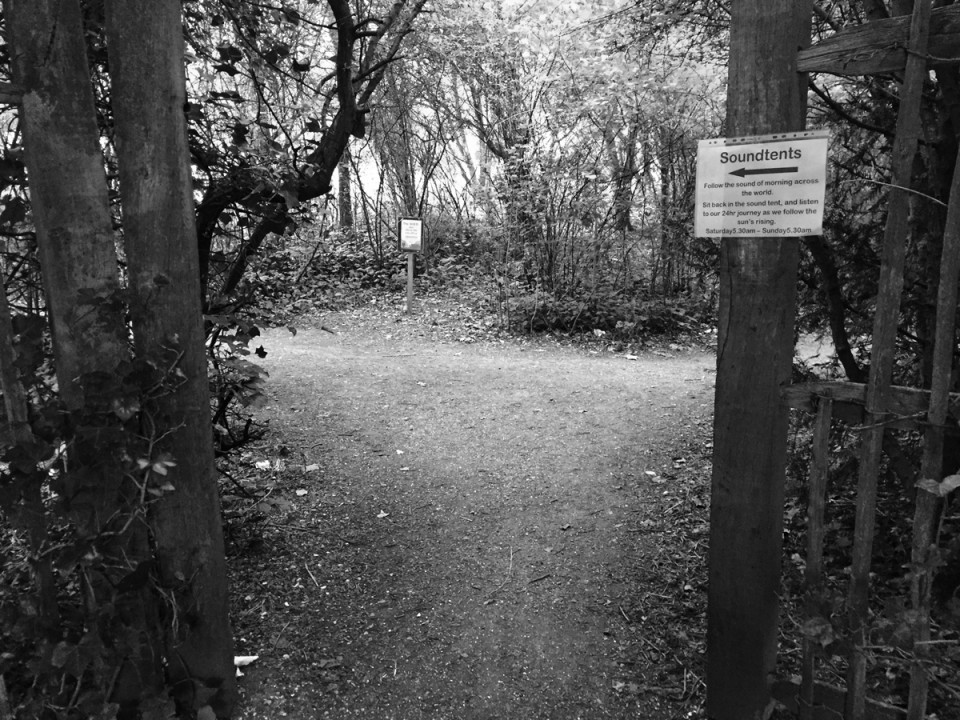 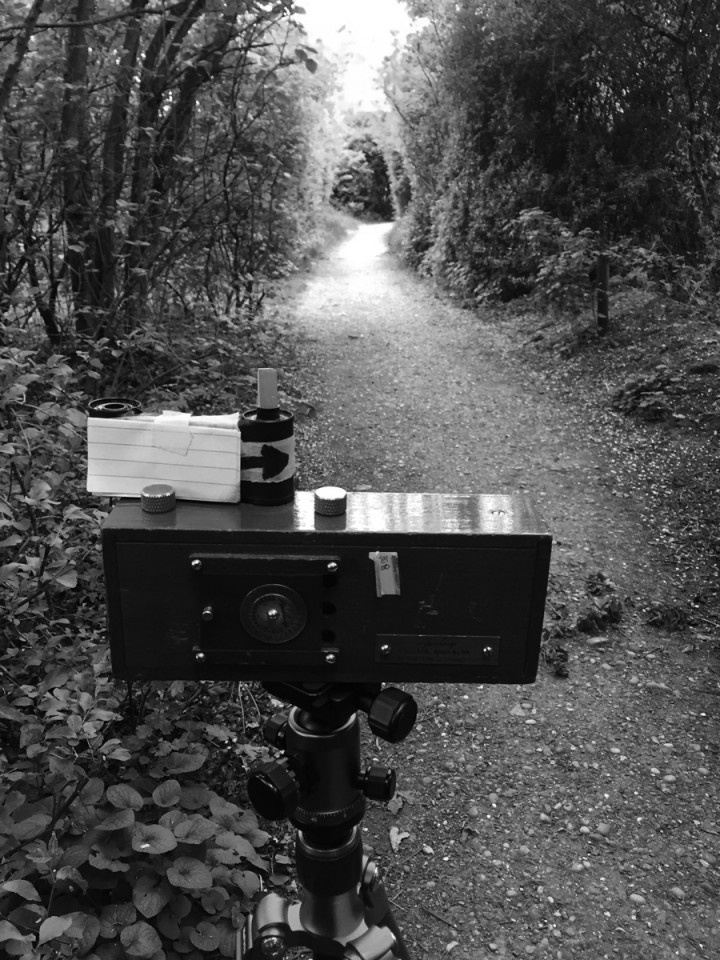 Cameras for Solargraphs in situ at Stave Hill

I set up the cameras in similar positions to last year in order to have some continuity. The cameras were mostly small photo cans as they would be placed in more public areas, they were small and discreet, often hidden in the undergrowth. The cameras that were placed at the Shed were much larger tubes, postal tubes containing whole pieces of 10 x 8 photographic paper. I was hoping to capture a lot of detail. Four cameras were placed, one in each field and after taking a compass reading they were pointing South or as near to S/SE as I could get, sometimes the foliage just wouldn’t allow for the right positions.

Site One The Shed

The Solargraph camera was placed at approximately 10′ above the ground on a trellis fence, just to the right of the main building. The container was a postal tube, modified for the purpose. Unfortunately the weather was so awful that there was hardly anything visible on the photo paper. The second smaller tube did however prove successful and the sun trail is clearly visible. 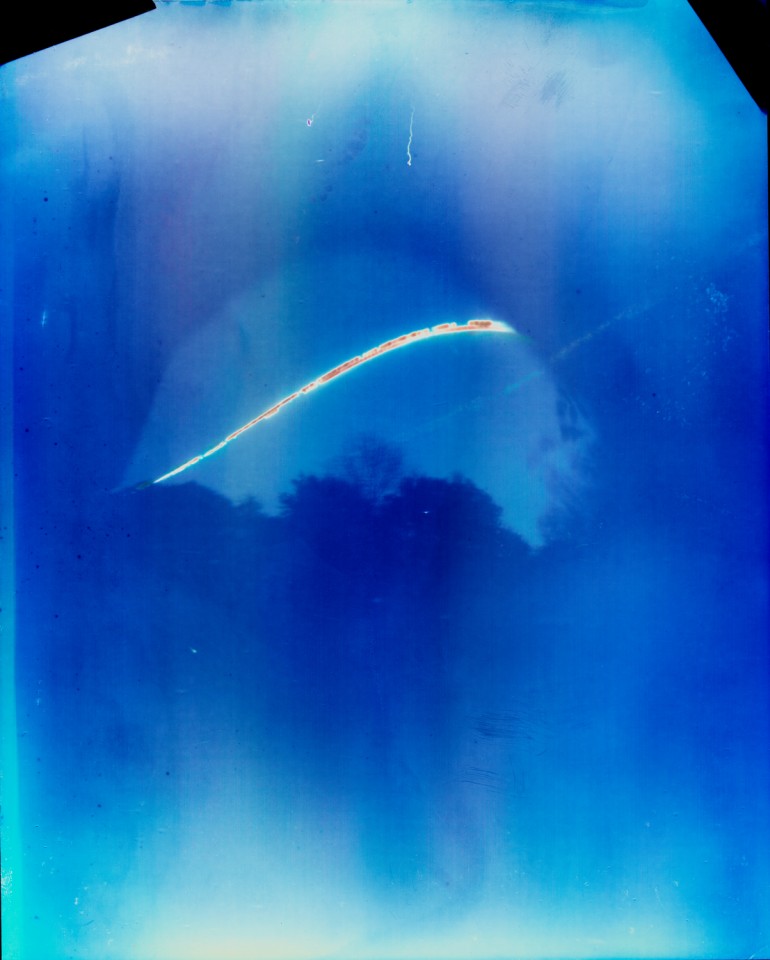 The can was pointing East but was probably moving slightly in the wind and so the image is not quite as defined as it could have been. The weekend weather did not improve and the conditions, especially for those who were camping, it was wet and the cold was penetrating, however good food was also on hand and the cooking area at the Shed was enough to keep the cold at bay. 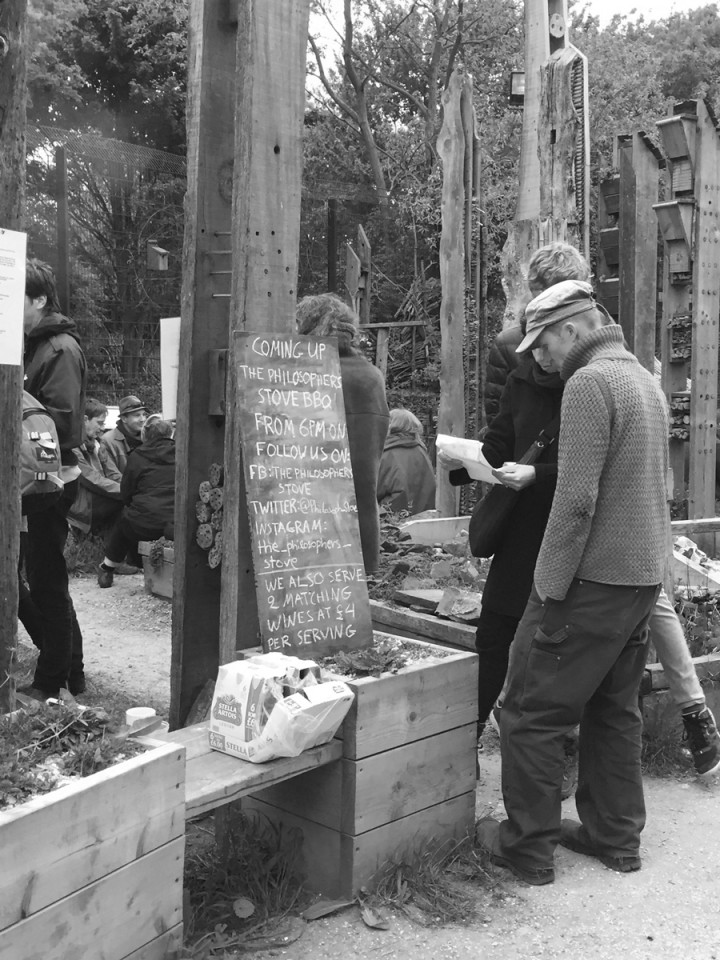 In Field two, where the Soundtents were situated I placed another tube in the undergrowth, it had a view just over the top of the tents and toward the line of trees. This has managed to capture a few days of sun trails and only a vague hint of the trees. The first image is how the paper comes out of the tube, the second shows how it has just been made into a positive in photoshop 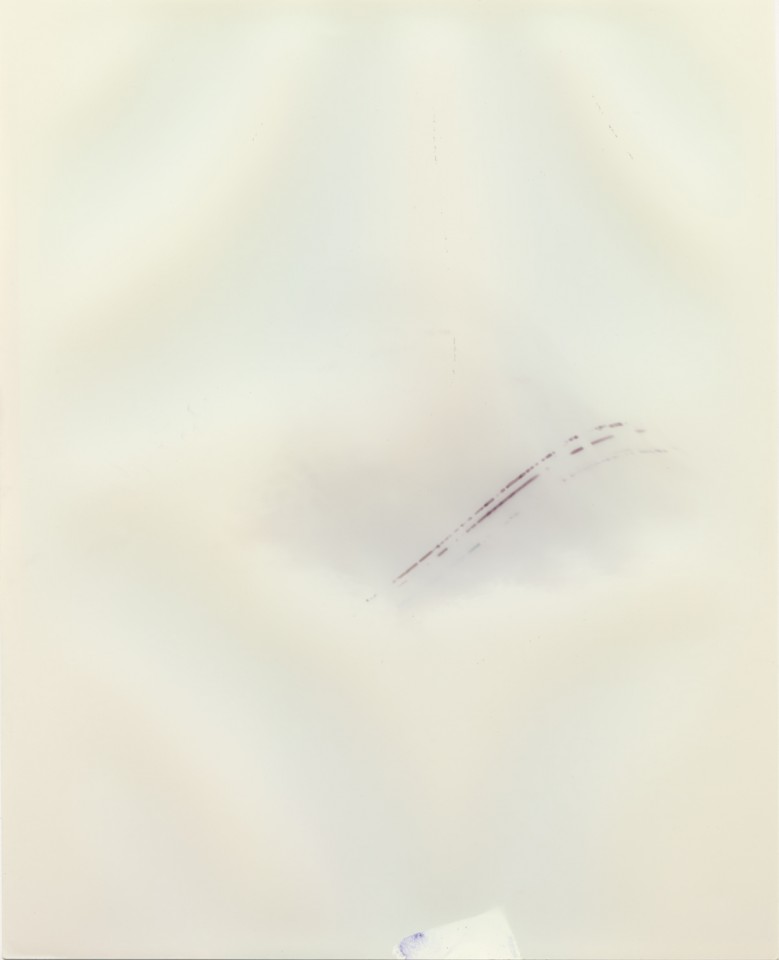 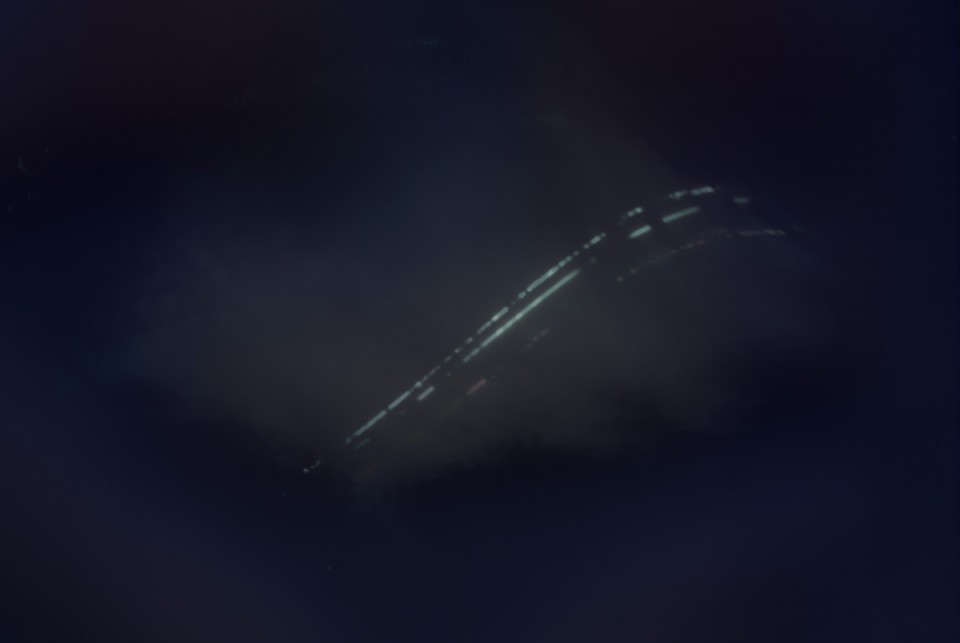 If you look closely you can see the trees in the distance and the obvious punctuated sun trails, showing how cloudy it was. 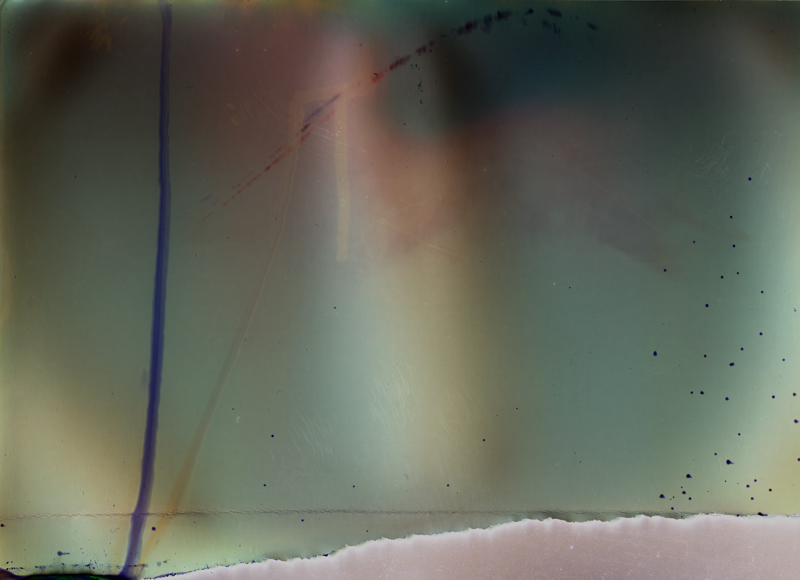 Field Four, The path looking toward the pond. 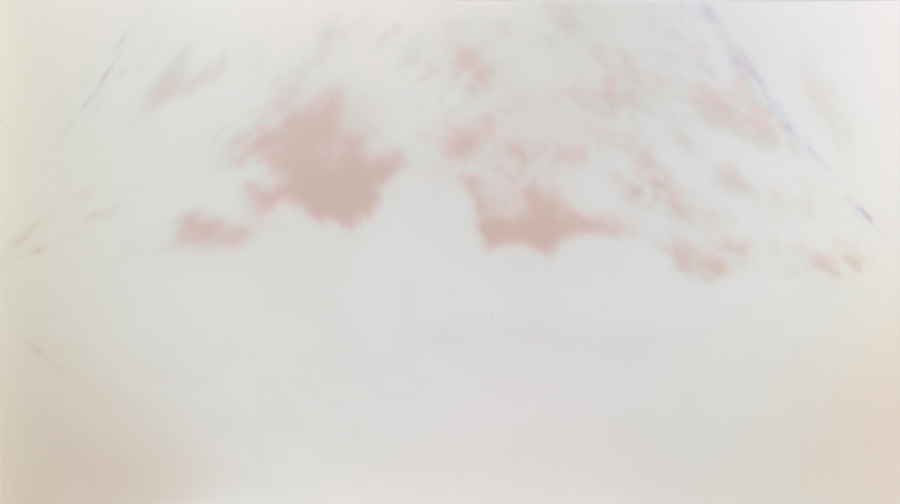 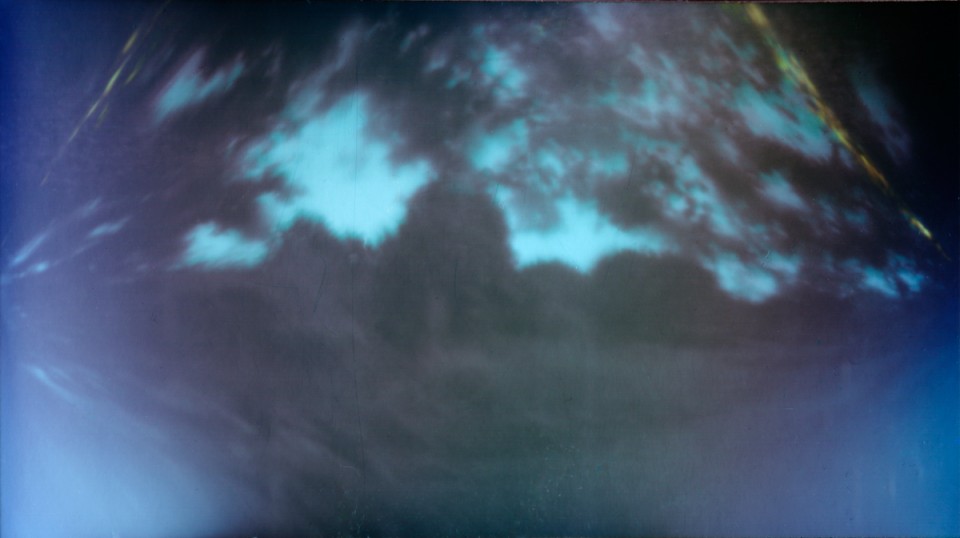 A view from within the Shed 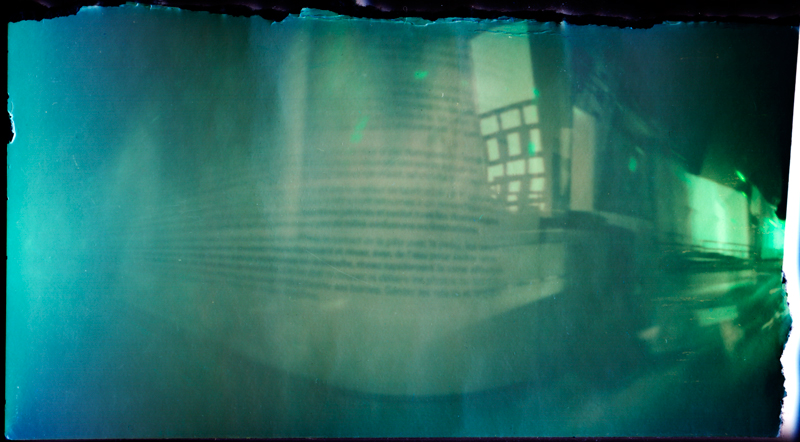 As well as placing Solargraph tubes out I did also make a few pinholes, I was using both a matchbox pinhole which I had constructed and two of my Zero cameras, the 4×5 and the 612b which I knew I could rely upon. The conditions were very dark, flat and gloomy and this meant some of the exposures were inordinately long, even approaching one hour, which for outside shots is a very long time to wait. Some of these just did not work at all. It was possibly too dark too damp or the film just too old but below are some examples from the weekend. As these photos are pinholes and long exposures, don’t forget that they have probably not captured all the people attending unless they were still for some time. The images below were made with a Zero 612b! 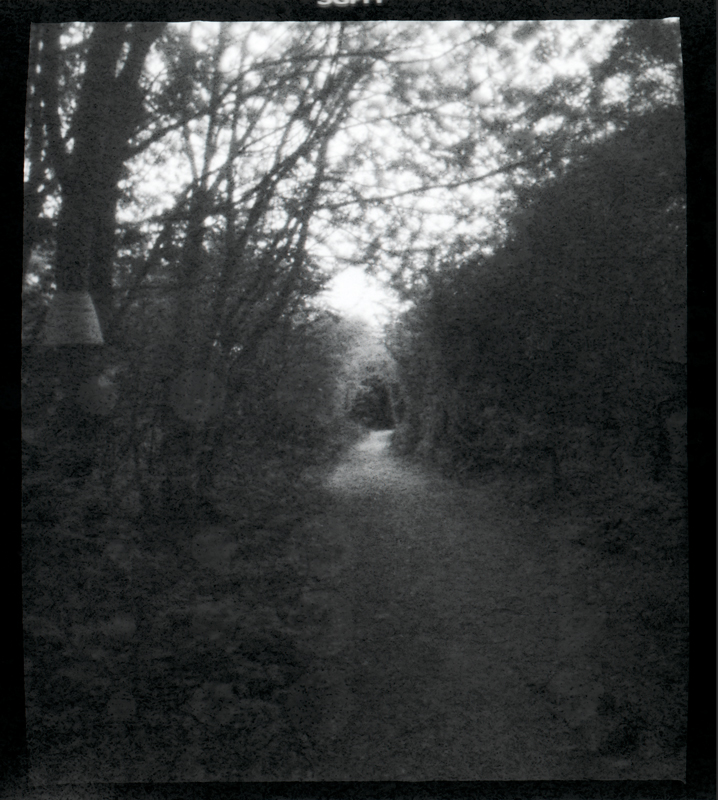 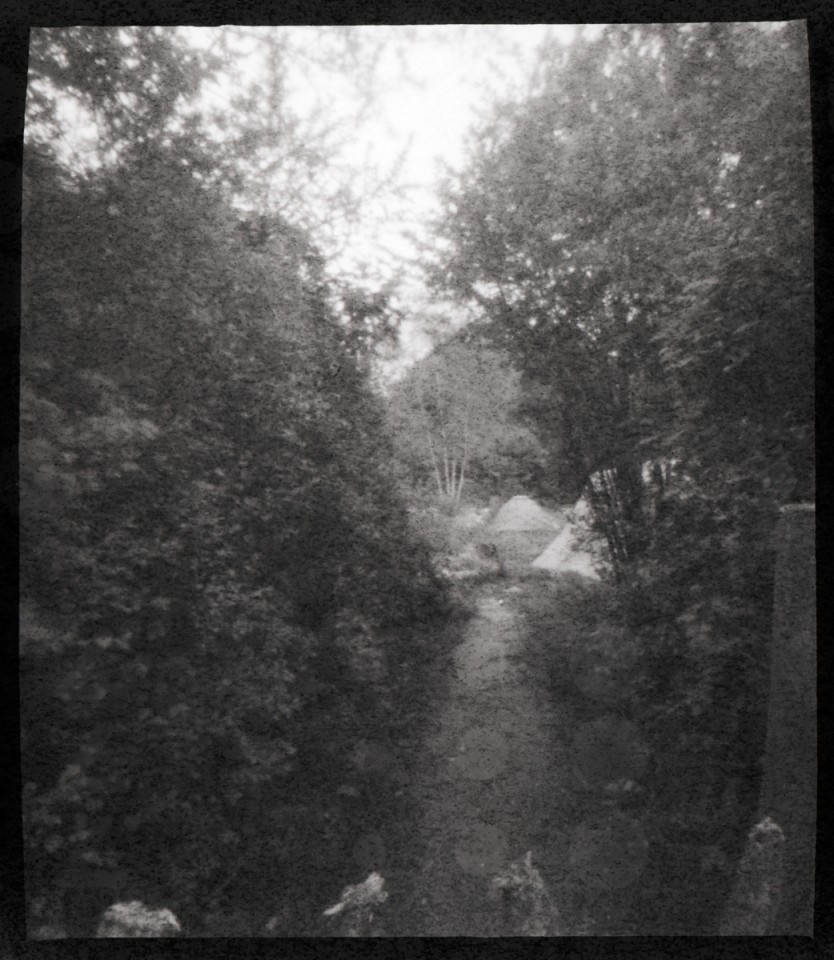 Setting up the tents 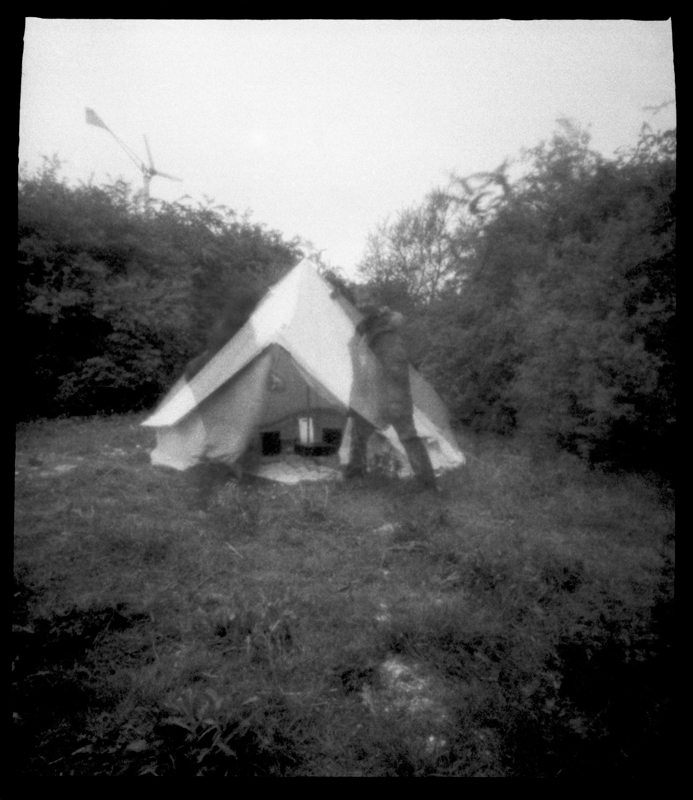 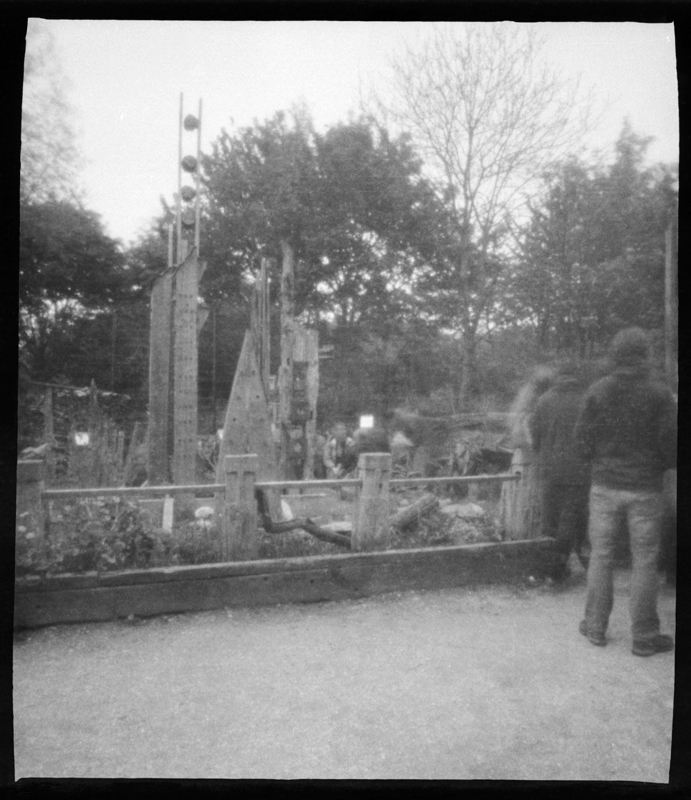 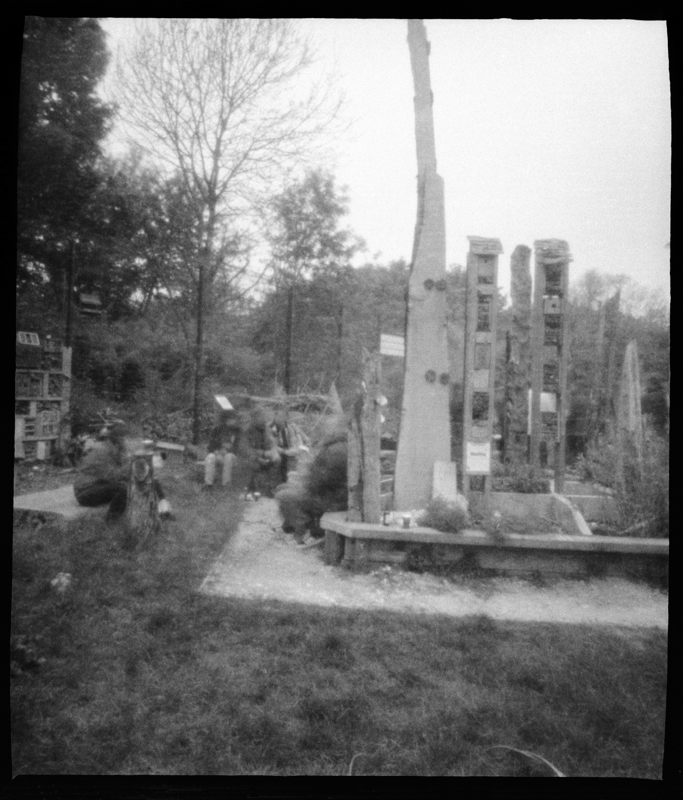 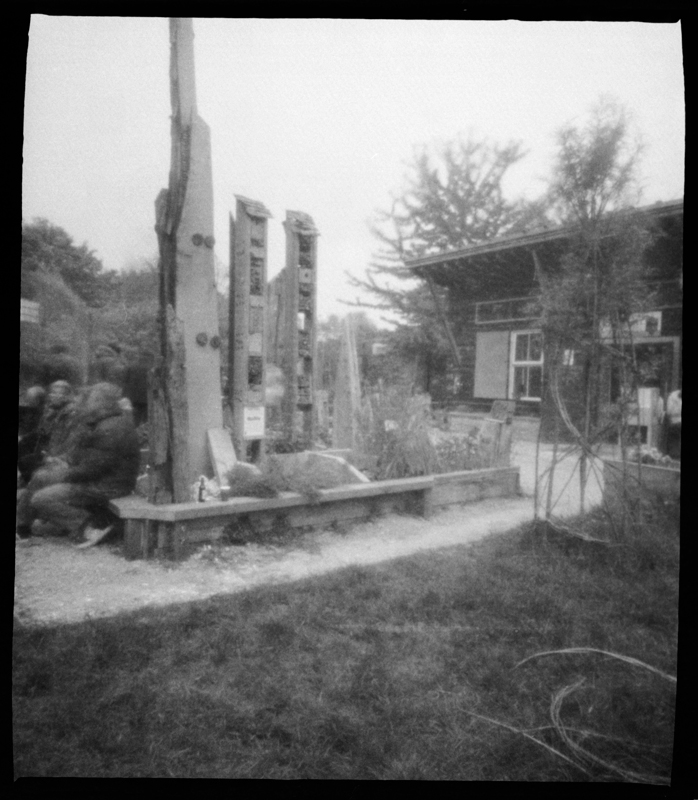 Time for a chat and lunch 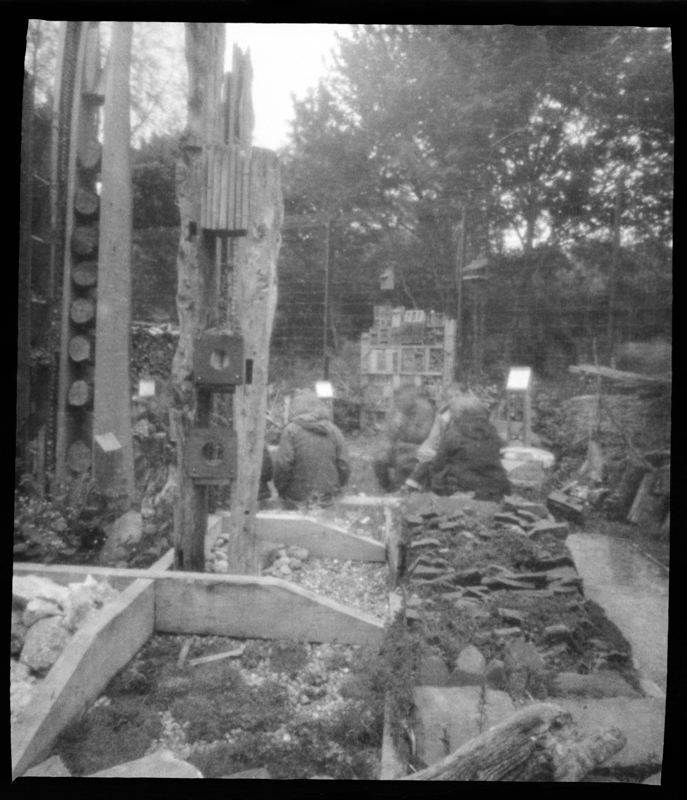 Hints of life, with ghostly shadows 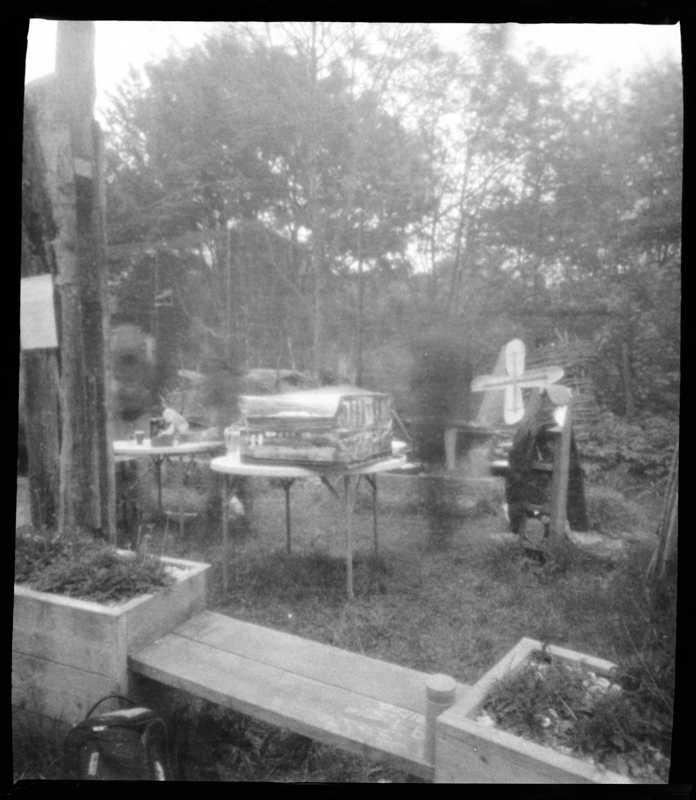 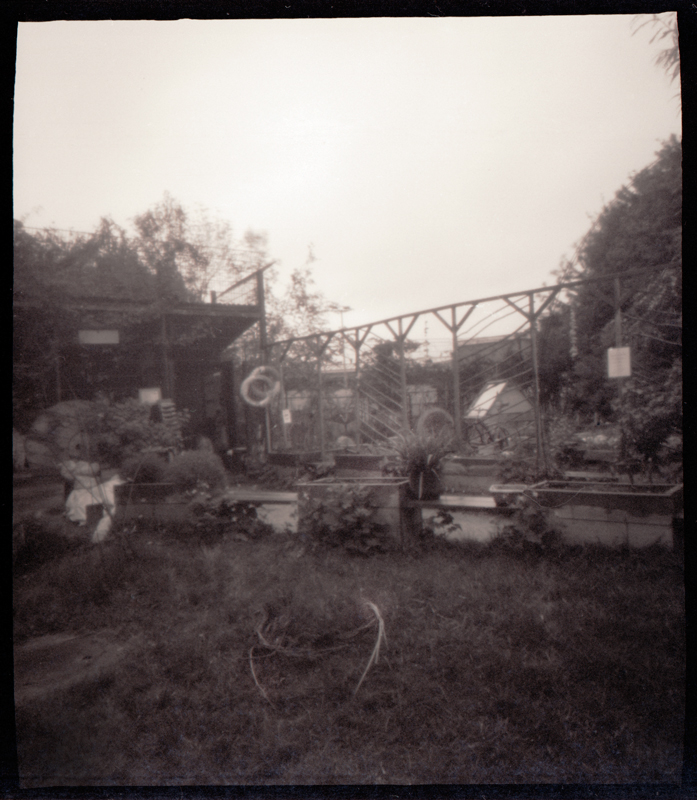 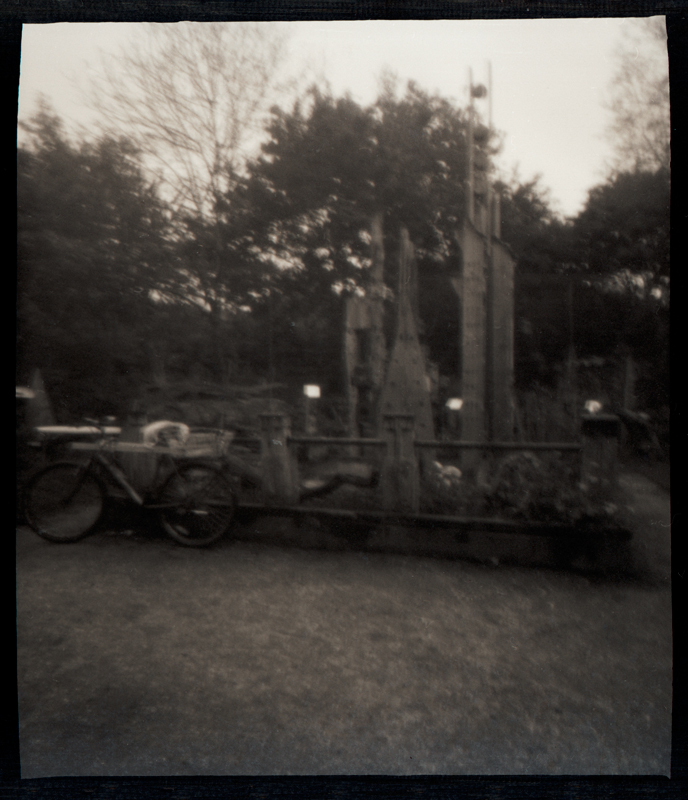 The Firepit was a wheelbarrow, just enough to revive frozen fingers 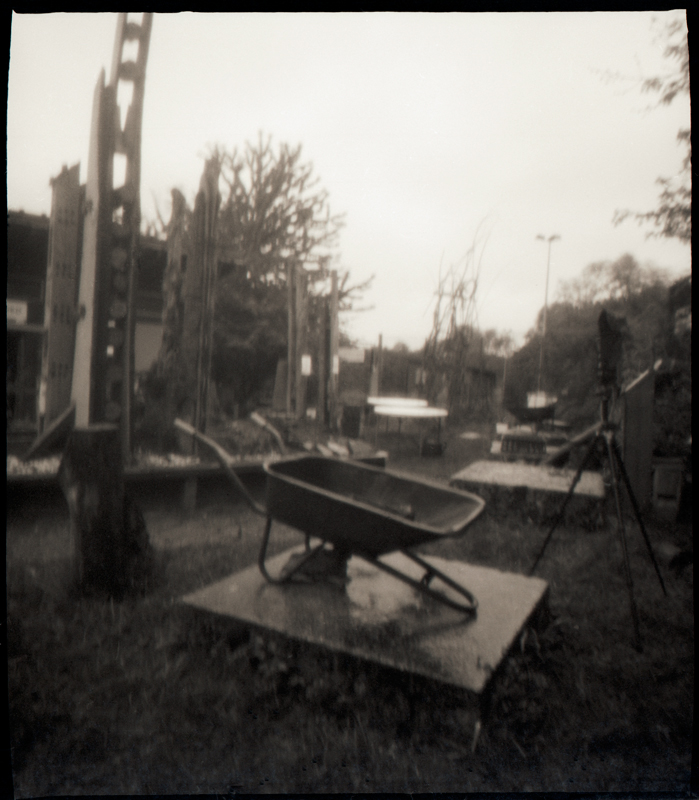 Portrait of the organisers 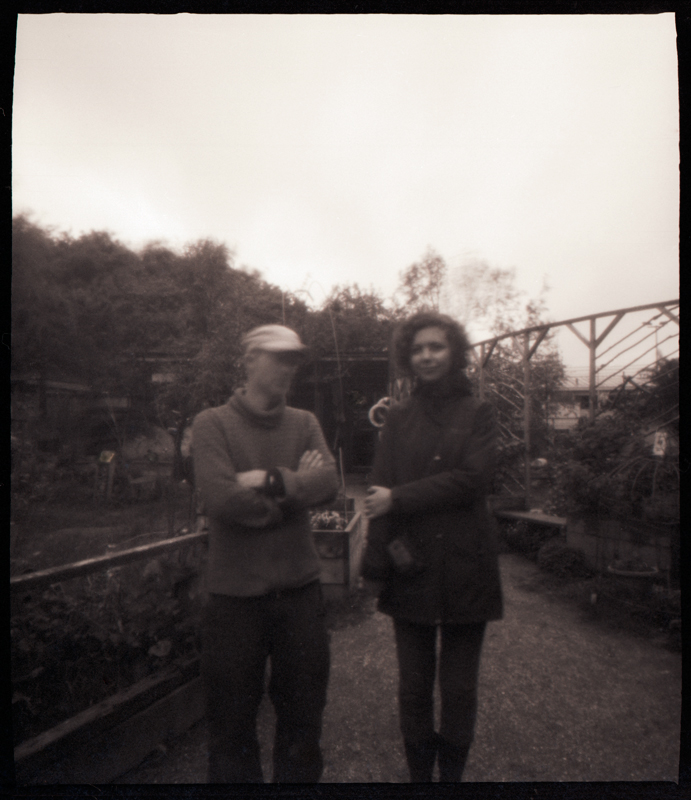 The camping field, a jumble of tents 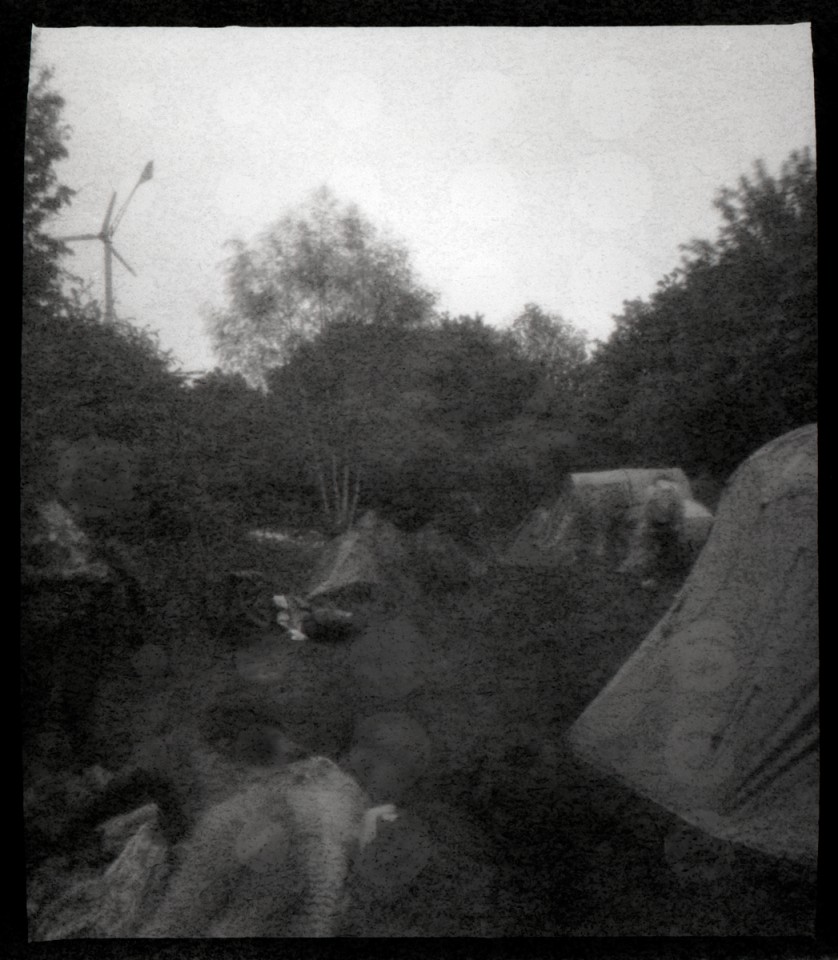 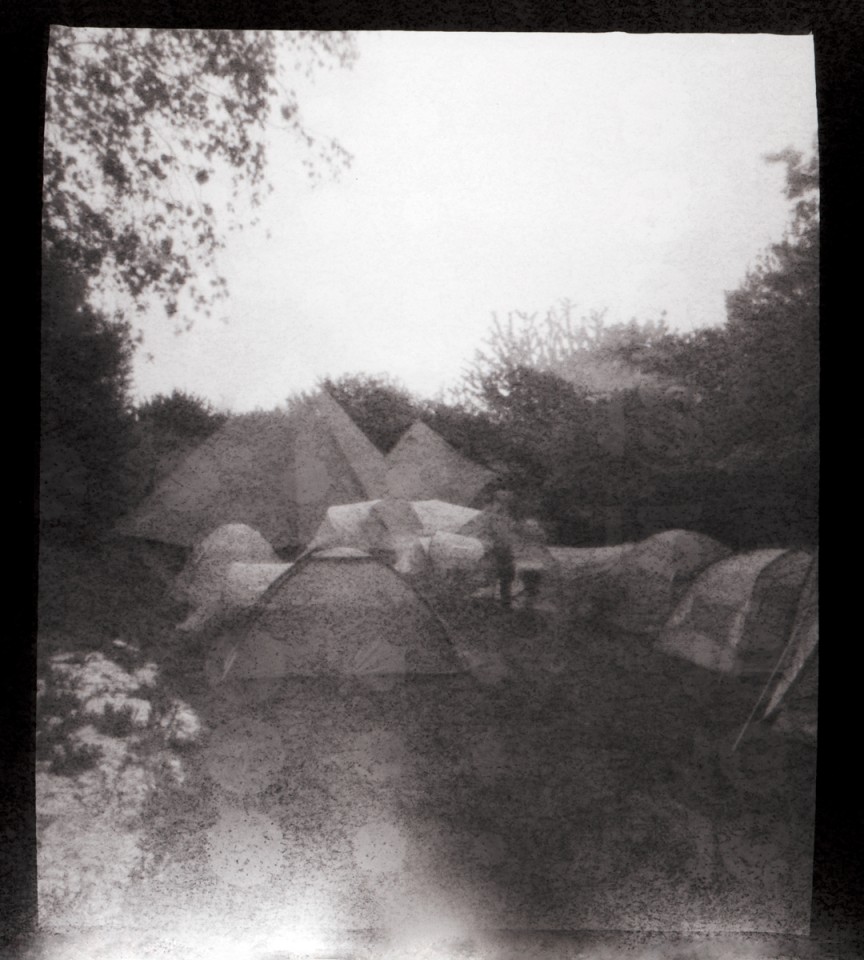 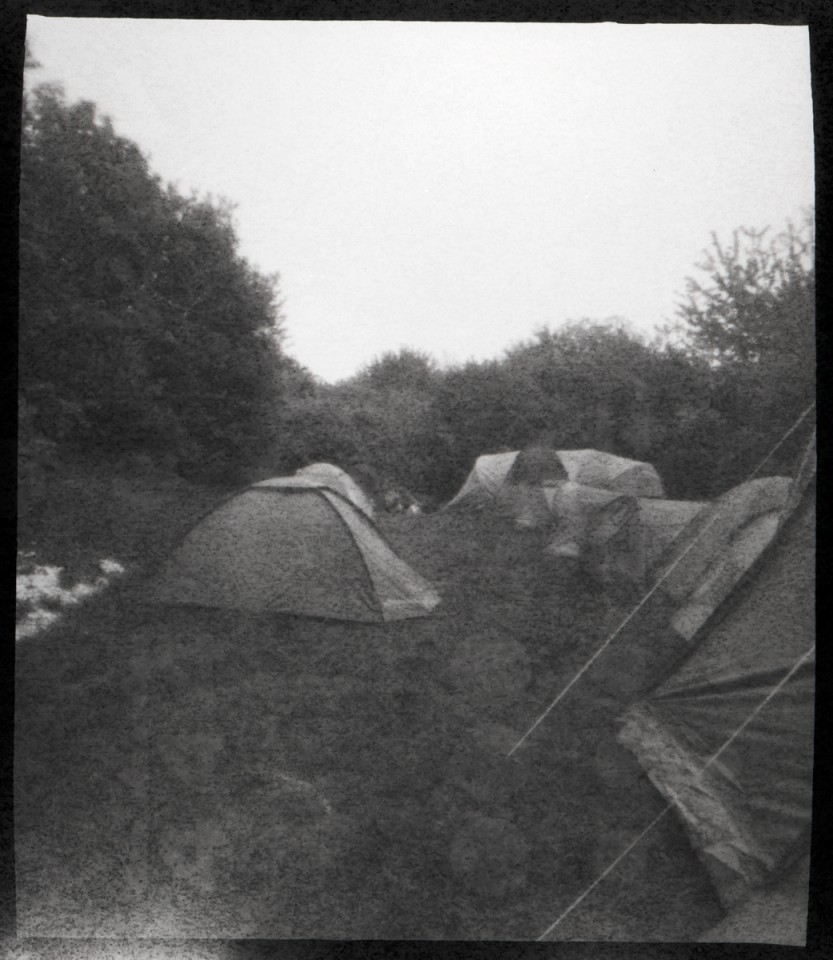 View from the top of Stave Hill across to Canary Wharf 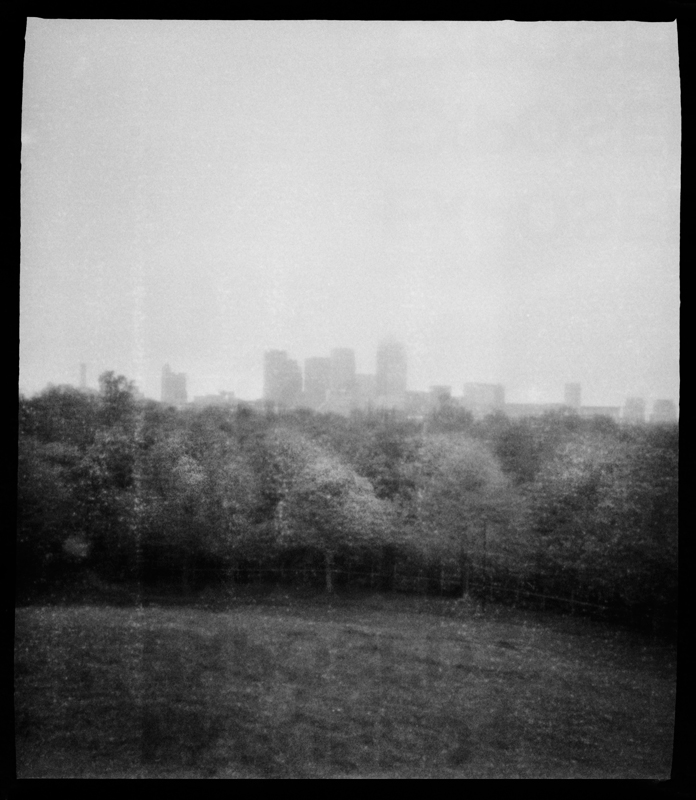